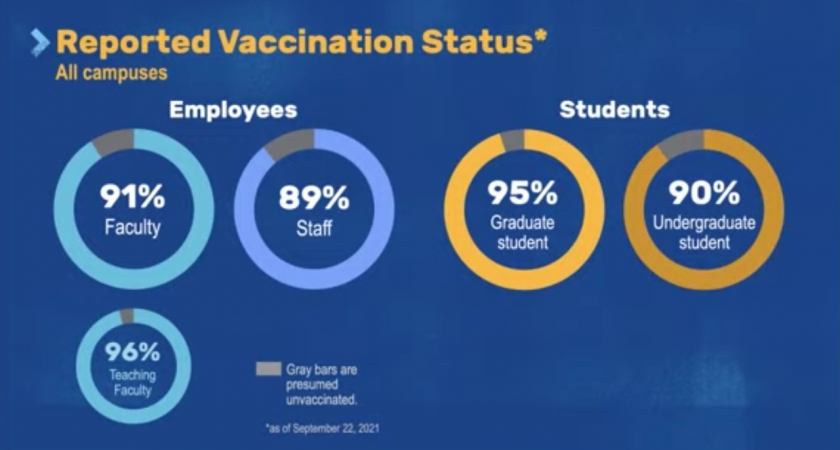 Immunization rates continue to climb to over 90 percent | University time

Despite the increase in immunization rates above 90 percent for the entire Pitt community, the issues surrounding the pandemic continue to be on the forefront of many minds at the University.

First, the good news: Figures reported by Pitt’s COVID-19 medical response office this week show that system-wide 91% of faculty, 89% of staff, 95% of students graduates and 90% of undergraduates uploaded proof of vaccination.

The numbers on the Pittsburgh campus are slightly higher and on the regional campuses slightly lower, but Chancellor Patrick Gallagher said at today’s board meeting that â€œin any case our rates vaccination rates far exceed vaccination rates in our surrounding counties. Truly, one of the safest places in western Pennsylvania may be on a Pitt campus. “

The Chancellor then thanked everyone who “sailed through the uncertainty of this early late summer and early fall, (and) figured out how to download these maps, how to get the information they need to maintain. access to our facilities. We understand that it’s been hectic, but I’m really excited about the extent to which our community is fulfilling its responsibility to ensure that we all do our part to make sure this is a safe place and a place to go. we can enjoy an excellent education in our classrooms and our research laboratories.

He said activities on campus have returned to much more normal, but the University realizes the virus is not going away and must find a way to coexist with it in a way that minimizes disruption.

Pitt is adapting in particular by opening a test site on campus this week on the first floor of the O’Hara Student Center. This test site is only for:

No symptomatic test will be offered on the O’Hara site; if you have symptoms, contact Student Health.

In Pitt-Johnstown, which has the lowest vaccination rate with 77 percent of employees and 73 percent of students, the faculty senate last week passed a resolution urging the Pitt system to “make vaccination against COVID-19 for all faculty, staff and students. The Oakland Campus University Senate passed a similar resolution in the spring.

At the Senate Committee on Admissions, Aid and Student Affairs (SAAA) meeting on September 22, Kenyon Bonner, vice-president of student affairs, said the latest figure he showed was 426 students. who did not comply with uploading proof of vaccination or a COVID Test.

â€œThese are the students that we haven’t heard from andâ€¦ who just aren’t going through the process, and these are the students who have been restricted in access to the building,â€ Bonner said. â€œOther students have tried to comply but have had problems either uploading their vaccination cards or retrieving test results.

Bonner said they started with 2,900 students marked as non-compliant as of September 15 and by September 21 that number was around 600. He said they would try to restore access to student buildings. as soon as possible once they have complied with the requirements. the requirements.

He said that so far 24,509 student vaccination cards have been approved.

â€œAnd these are all reviewed manually by Student Health,â€ Bonner said. â€œThey’re all vetted so students don’t just upload a photo of their cousin and pet. These cardsâ€¦ are truly examined by a person.

If there is a problem with the uploaded image or the map itself, Student Affairs will follow up with the students to resolve them.

â€œIt’s a week-to-week process, so a student could be compliant for a week and then not test negative the following week,â€ Bonner said. â€œThat’s why the numbers fluctuate, but I think the overall trend is that fewer students are not compliant. And I think as we move into next week that number will decrease even more as students develop a routine and start using the process on campus, as it has the ability to reduce shipping times. upstream.

Several people at the SAAA committee meeting spoke of problems with delayed testing, not only for those who have not been vaccinated, but also for anyone who has been exposed to someone with COVID-19 or who has symptoms.

Co-chair Nancy Glynn, assistant professor of epidemiology at the Graduate School of Public Health, said after being exposed to someone with COVID, it took her five days to get the Quest test kit. By that time, she had taken a test elsewhere and got the results. The problem is, if you come out of Quest to take the test, you need to make sure your results are reported to the university, she said.

Sybil Streeter, the committee’s other co-chair and professor of psychology, recently taught two courses, and â€œ10% of the students who should have been in my classes weren’t for delays in test reports or waking up with it. symptoms that appeared to be COVID. “

Questions were raised in the Education Policy Committee this week about how to accommodate students who are sick and which the University does not want to see coming to class. Joe McCarthy, vice-president of undergraduate studies, made it clear that faculty can record their classes for these students or can simply access Zoom through their laptops to connect with a student during class (see related story ).

Streeter also said the building she was in, which she did not name, had no mechanism to prevent anyone from entering. There were sliding machines, but no security guard or janitor made sure people were sliding.

Student Government Council chairman Harshitha Ramanan, who is on the committee, said SGB had received several reports from students that no one was at a checkpoint. The board is considering developing a form where students can report these issues. Bonner said such issues should be reported to Public Safety or via Pitt Concern Connection.

Ramanan said the organization has also tried to stress to students that they should stay home if they are sick, even though it is not COVID.