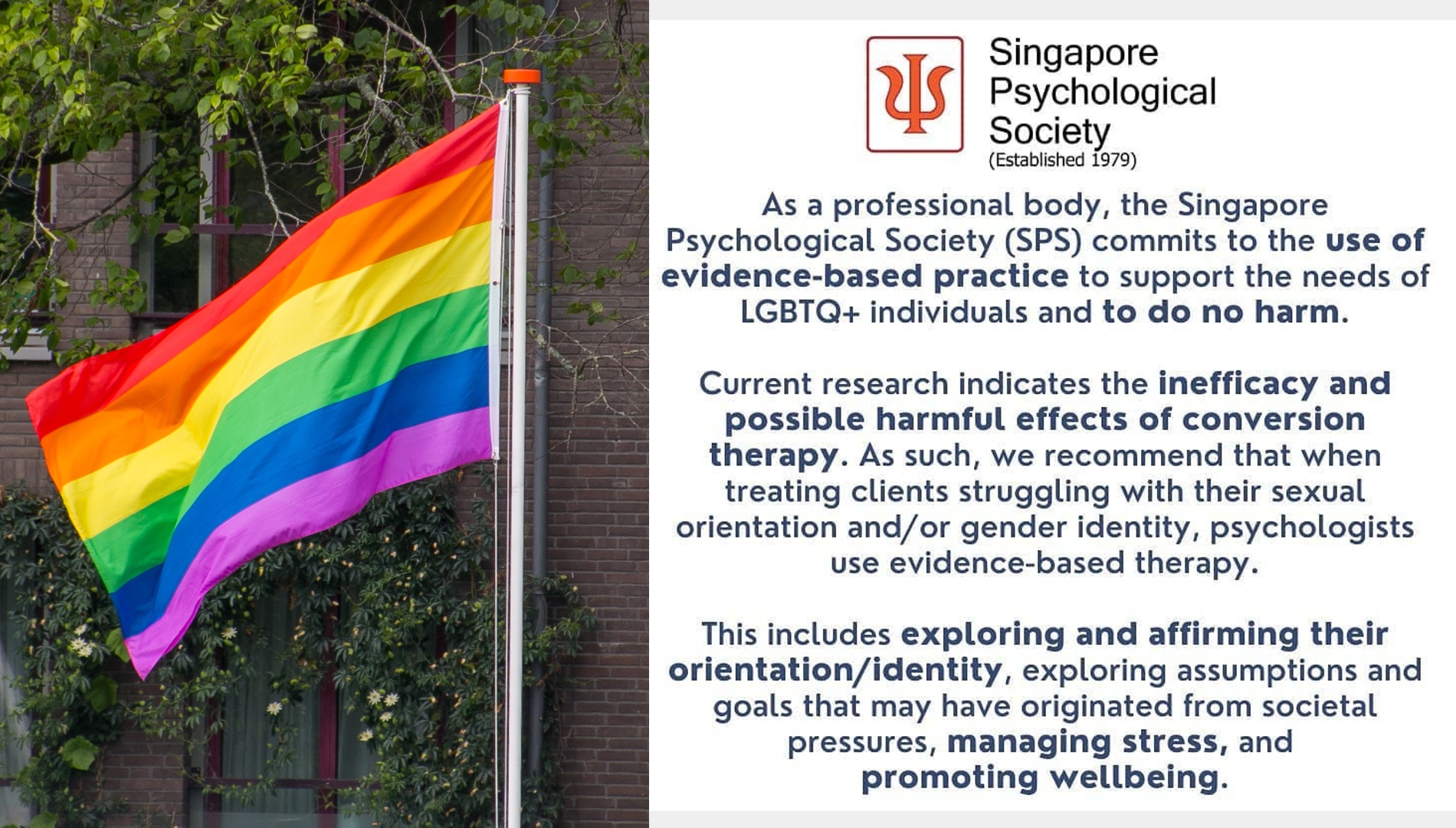 SINGAPORE – The Singapore Psychological Society (SPS) has denounced “conversion therapy”, the practice of trying to change or remove the sexual orientation or gender identity of LGBTQ people, calling it ineffective and harmful for individuals, and recommends that psychologists use evidence-based therapy to help LGBTQ clients.

In a statement posted on the company’s social media yesterday, SPS said:

â€œAs a professional body, the Singapore Psychological Society is committed to using evidence-based practices to meet the needs of LGBTQ + people and do no harm.

Current research indicates the ineffectiveness and possible harmful effects of conversion therapy. As such, we recommend that when treating clients struggling with their sexual orientation and / or gender identity, psychologists use evidence-based therapy.

This includes exploring and affirming their direction / identity, exploring assumptions and goals that may arise from societal pressures, managing stress and promoting well-being. “

SPS is the first professional organization in Singapore to take a stand on conversion therapy.

The company was reacting to news that Canada’s House of Commons passed a bill criminalizing conversion therapy on June 22. The bill has yet to be passed by the Senate of Canada to come into force.

SPS said that people’s sexual orientations or innate gender identities are not mental disorders to be corrected and that treatment of LGBTQ clients should focus on their mental health needs instead of changing their “being.” .

SPS also wrote in its post: “As Pride Month draws to a close, SPS stands with each person for their deepest ‘me’ (that is, the person they are truly feels and identifies as) – and in particular, we honor the LGBTQ + population who have suffered deeply, and whom we deeply cherish as they do.

The Singapore Psychological Society is the local professional association of psychologists. It currently has 1,102 members, including 534 registered psychologists.

What is conversion therapy?

Conversion therapy can be performed by mental health professionals, religious practitioners, or members of the community and family. It seeks to change a person’s sexual orientation or gender identity, or to reduce their sexual attraction or non-heterosexual sexual behavior. It is practiced in many places around the world; techniques include electroshock treatment, “corrective rape”, psychotherapy, abstinence training, cognitive restructuring, masturbatory reconditioning or religious prayers and exorcisms.

Places like Germany, Taiwan, Brazil, Malta, Ecuador, India, the UK, and Canada have taken steps in recent years to ban conversion therapy because research has shown that it is ineffective and linked to depression, suicidality, anxiety, social isolation and reduced capacity. for privacy.

Attitudes towards LGBTQ people in Singapore remain largely conservative, and major Christian and Muslim faith groups have said that homosexuality is unnatural. There is little data on the practice of conversion therapy in Singapore, but therapy professionals and religious practitioners are known to practice it.

Psychologist Camellia Wong, whose specializations include gender identity issues, said: â€œIt’s great that SPS recognizes that LGBTQ people in Singapore also need help with their own mental health, and recognizes that therapy conversion does more harm than good. For those who haven’t yet. Knowing what SPS is doing will be a good source of factual information about the damage done by conversion therapy when they research this topic, especially for those who experience discrimination from members of the family who want them to undergo conversion therapy. “

Leow Yangfa, social worker and executive director of Oogachaga, an NGO that provides counseling services to the LGBTQ community in Singapore, said it was not unusual for them to see clients who had undergone conversion therapy. harmful effects of their former therapists or religious leaders, leaving them with observable symptoms of shame and trauma.

â€œIt is extremely important for the Singapore Psychological Society to be the first professional organization in Singapore to take a position clearly based on science and evidence, instead of one based on subjective opinions or religious beliefs,â€ said Leow said. “It remains to be seen whether other relevant professional bodies, such as the Singapore Association of Social Workers and the Singapore Counseling Association, as well as those in the nursing, medical and psychiatric professions, will follow suit. Elsewhere in the countries. developed world, such as the UK, US, Australia, New Zealand and Taiwan, many trade associations are already taking evidence-based positions against such conversion practices.

â€œAs well as being meaningful, it also sends a symbolic message to members of the local LGBTQ + community that they will be safe, assertive and respected when accessing these services,â€ Leow added.

Pauline Ong, executive pastor of Free Community Church, the only officially affirming LGBTQ church in Singapore, said: â€œThe Singapore Psychological Society’s statement is timely and meaningful because conversion ‘therapy’ is still ongoing here in Singapore. , although in forms than in the past. The current forms are more subtle but still just as harmful. Psychological conversion therapy is still conversion therapy, and anything that seeks to reprogram the mind through negative feedback and forced shame is harmful to a person’s mental health and well-being. We have seen this happen in some religious circles and it is heartbreaking. We believe that it is possible to reconcile his identity or orientation with his faith in a healthy way. “

The Singapore government told parliament last year that homosexuality is not a clinical disorder that must be cured, citing international medical classifications, and that the Department of Health expects doctors and medical professionals that they practice in accordance with best practice and evidence-based clinical ethics. .

However, homosexuality remains illegal in Singapore. Three separate court challenges against section 377A of the Penal Code, a law that criminalizes sex between men, were dismissed by the High Court in March last year.

60 psychologists and counselors across Kashmir provided training; helpline will be…